The July/August issue of the Tennessee Conservationist Magazine is in the hands of many subscribers now and if you haven't received your copy, its on its way. This issue includes my article on the "The Peregrine Falcon in Tennessee" and I am delighted that the article received the cover headline. 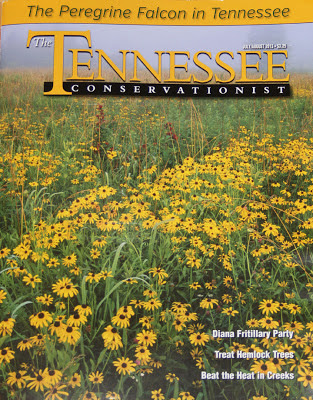 The recovery of the Peregrine Falcon is one of the greatest conservation stories in our nation's history.   Peregrine Falcon populations plummeted in the United States due to the widespread use of DDT after WWII, and the species was completely extirpated from the eastern United States.  A species that preys on small birds, peregrines absorbed the pesticide into their tissue and their eggs became too thin for incubation. 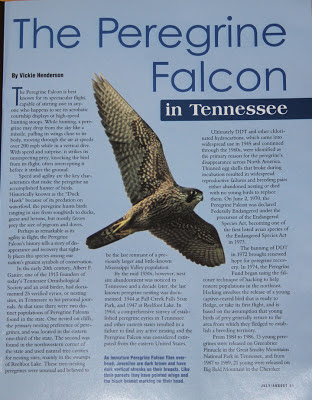 The article tells the story of restoration efforts in Tennessee and the first breeding Peregrine Falcons discovered in 1997, fifty years after the species disappeared from the state.  But Tennessee's story is not complete.  USFWS reports that North America recorded from 2000-3000 breeding pairs of Peregrines in 2012.  Tennessee records currently confirm only one productive breeding eyrie, while neighboring states report from 10-23.  In the early twentieth century, prior to the species decline, Tennessee had 25 confirmed eyries. 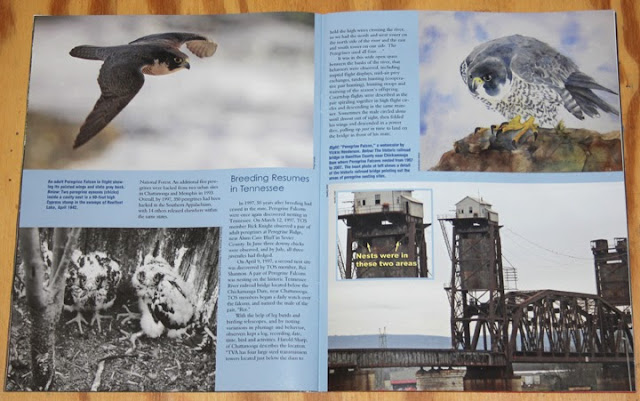 It is uncertain whether more birds are breeding and remain undetected, or some unknown factor is interfering with the return of the species to historic breeding sites. Hopefully, the article will raise awareness and increase efforts to discover the reason for the Peregrine's slow recovery in Tennessee.

I would like to acknowledge those who contributed information to this article, especially fellow Tennessee Ornithological Society (TOS) members , Harold Sharp and Jack Gentle for their historical observations and photographs, and the TOS publication, The Migrant.  Greg Lavaty of  Sugar Land, Texas, contributed beautiful flight photographs. 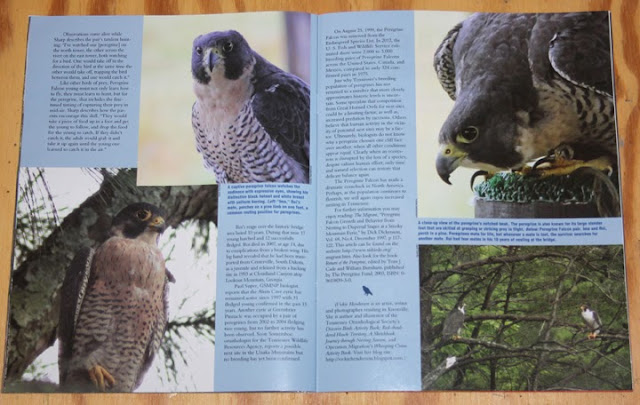 A special thank you to Louise Zepp, editor of the Tennessee Conservationist Magazine, and her staff for the beautiful layout, cover headline and for highlighting the article on the magazine's website.