Swift Night Out is a fun and amazing way to spend an evening.  Not only are participants helping to count chimney swifts during migration but they personally experience one of nature's avian wonders--the high-speed roosting ritual of chimney swifts. 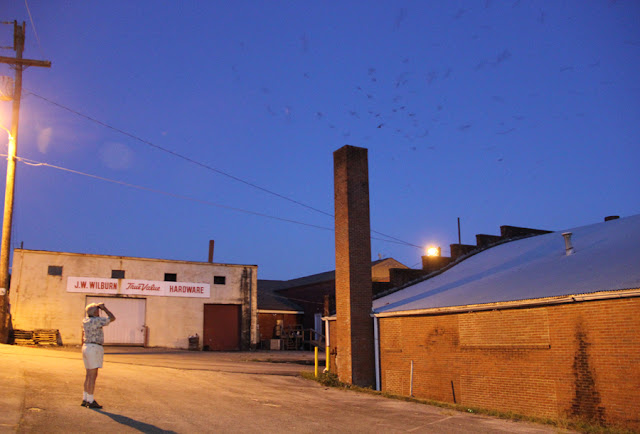 The show begins at dusk and lasts about 30 minutes. When we first arrived at the site, the historic War Memorial Building in Lenoir City, Tennessee, it was about 8:10 pm. We saw and heard one swift overhead but in less than five minutes, hundreds appeared flying overhead, some coming down near the tops of our heads and curving past us. Suddenly, they seemed to be everywhere. Swifts initially swirled around the chimney in fly-bys, until eventually, one by one, they began dropping into the chimney. And that's what it looks like, as though they've turned off the "engine", and with heads pointed downward, allow gravity to propell them into the chimney.

The mass momentum builds until dozens of birds may descend in rapid succession.  At one point, the sky suddenly became silent.  No sound.  No birds.  Denise described it as happening routinely, "as though someone turned off a faucet" and I agreed.  Another burst of activity followed beginning a few minutes after the pause, and lasting only a few minutes more until the flock was settled in for the night.


My videos will introduce you to the phenomenon but it is definitely one of those events that you will want to experience in person.  In the video background you can hear a generator but the chirping of the swifts overhead can still be clearly heard.  Just how swifts synchronize this roosting frenzy so that everyone lands safely inside is beyond comprehension.  One wonders how they know about the chimney and judge its walls to be safe.  How can over 500 swifts find roosting space in a chimney that does not appear all that large? How do the birds manage to grab a perch while in the midst of communal high-speed descent?  Are these birds local birds gathering prior to migration or migrants passing through or both?

Denise and Tony King, of Lenoir City, members of the Knoxville Chapter of the Tennessee Ornithological Society, have been watching and counting chimney swifts in Lenoir City for about six years. They first became interested when they noticed the large numbers of swifts coming to roost in a chimney in their neighborhood.  That roost site is no longer there but it spawned their interest and a search around town revealed other migration roosting sites.  The historic War Memorial Building chimney is the largest and most active they've found in the area. 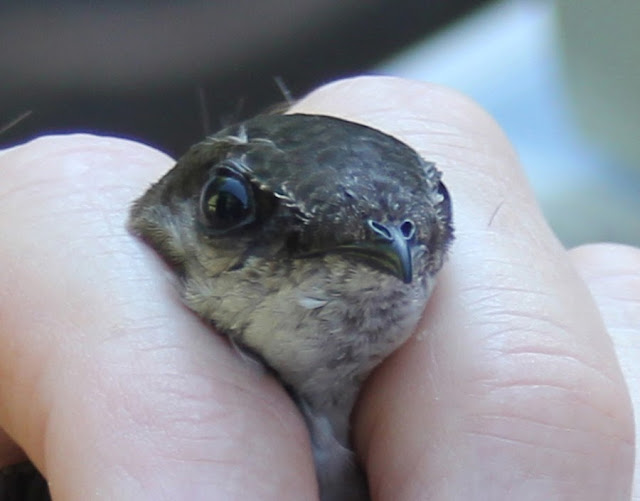 Above, a chimney swift held in a banders grip.

Denise and Tony participate in a Swift Night Out, an effort to increase interest in swifts and to locate and count migrating Chimney Swifts and Vaux Swifts.  Chimney swifts are believed to be declining due to the destruction of old chimneys commonly used for roosting sites and required for nesting.  Old chimneys found at industrial sites, churches and older homes are likely places for a communal roost.

To find a known swift roosting site near you visit the website's list of 2012 roost sites all across the country and click this link to see reports thus far in 2013 . A phone call to your local birding organization may also help you get acquainted with members who can introduce you to a roost site.

Next:  A look at Chimney Swifts from the banding table