It happened that I visited the Taos Pueblo on the day of their Corn Festival. 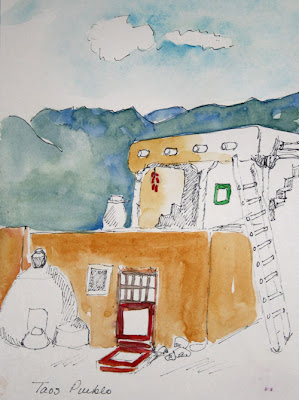 cameras, sketching or recordings be allowed while visiting on this day. What you see here are sketches that were created after I returned to my hotel.

This was a new experience, the reliance on visual memory rather than reference photos. The detail stored is attached to what was most impressive or enjoyed. For me it was the drum beat, the native language, the women’s costumes, especially their boots and hair, the blankets the men wore over one shoulder and the overall reverence for ritual and tradition.

Only some of this can be rendered visually, but the images created hold the essence of the experience and bring to mind what matters. 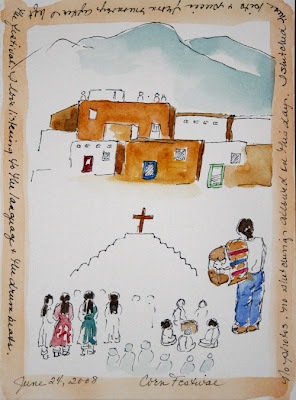 When I look at these sketches, I also recall what is not depicted, the two young German boys, ages four and six, who sat near me on a log bench in the courtyard as we awaited the ceremony. They had just moved to the states with their parents. A large thunder cloud darkened the sky and big, cold rain drops began to fall. The parents walked over to a shelter to avoid the rain, but the boys and I remained on the bench. 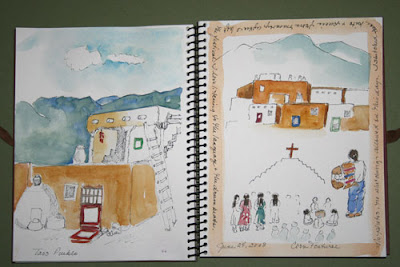 I opened a small umbrella, anticipating a sudden down pour as the cloud moved overhead. But no sooner had I opened it, than the gusting wind flipped it inside out. As I struggled against the wind to correct this, I looked at the boys who were now staring at me, and muttered something silly like, “a lot of help this umbrella is.” The older boy laughed and turned to his brother to interpret. The younger child collapsed into contagious giggles and the three of us giggled together while the wind blew rain in our faces. Watching from a distance, their father laughed, too.

I was struck by the warmth of this moment, the comfortable sense of connection that lept over barriers of strangeness, language and culture and united us all in the intimacy of shared laughter. Laughter is such a powerful energy. It, too, lives on in these sketches.
Share |
Posted by Vickie at 6:00 AM