Let's talk about getting along. 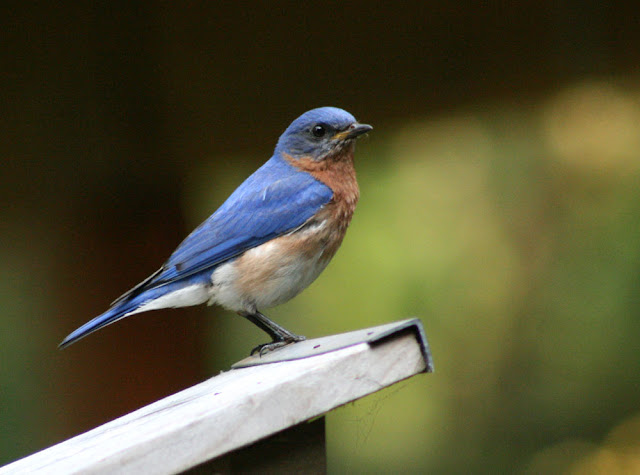 I have a pair of nesting Eastern Phoebes in my yard, who are very loyal to the gazebo shelf as their nesting site.  Not just one shelf, but they claim the entire gazebo, all of its posts, and all eight of its shelves, protecting this site valiantly.  They have nested here for three years, on one shelf or the other. 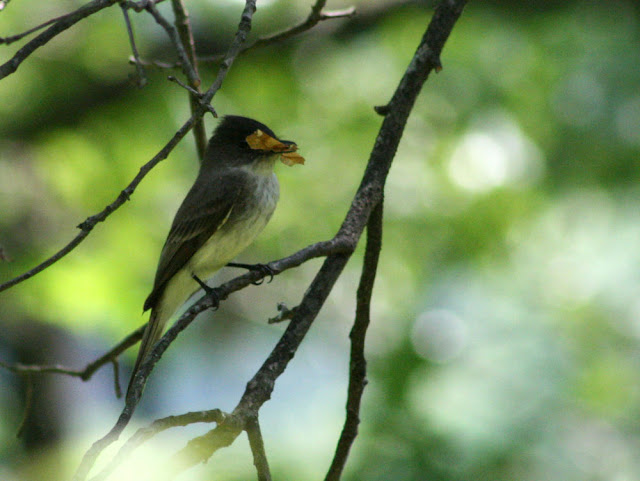 While watching nesting birds raise their young you become acquainted with the behavior of nest building, of feeding, when parents are calm and life is routine, and when behavior changes abruptly and the birds are agitated.  And I've discovered that the ease with which neighboring nesters get along varies with the phase of the nesting cycle. 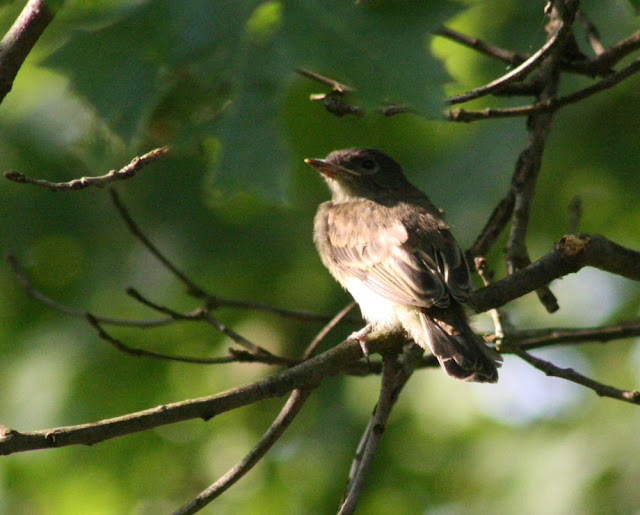 For example, one of the most sensitive times for these two species is clearly when nestlings initially fledge. Parents become aggressive and protective when their little ones have just fledged. The young are not strong at this point and their flight skills and judgement are just developing. They are babies, tentative and naive.

Phoebes are delightful, vocal, agile, precise in their incredible flight maneuvers and loyal to their mate and their nesting territory.  Bluebirds are strong flyers, too, able to hover in place like kestrels, swift and determined.  They too, are loyal. I'm not referring to mate fidelity, but loyalty to the nesting site and territory, and to the many interactions that clearly bond the nesting pair together in their efforts to raise and protect young. 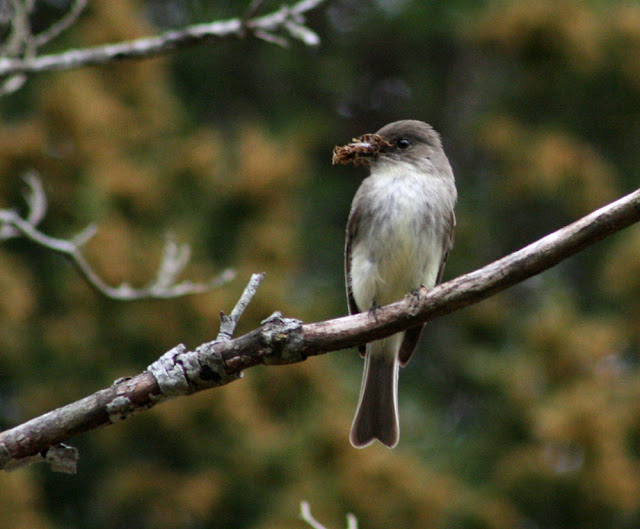 This morning I witnessed two battles between the phoebes and the bluebird pair, and this conflict was instigated by the bluebirds.  Though they tolerate the phoebes' presence high above their nest box, there are times when they make it clear they don't like it. Today, the female left the roof of the nest box and flew up to the gazebo shelf. One of the phoebes, I couldn't be sure which one, flew off its perch and immediately challenged her. The two fluttered out into the air, beaks clacking, until they descended to the ground in a flurry of wings. The male bluebird joined his mate by landing on the nest box, and when the female bluebird parted from her opponent, she perched beside him, clearly affirming their ownership of the nest site, their intolerance of intrusion. 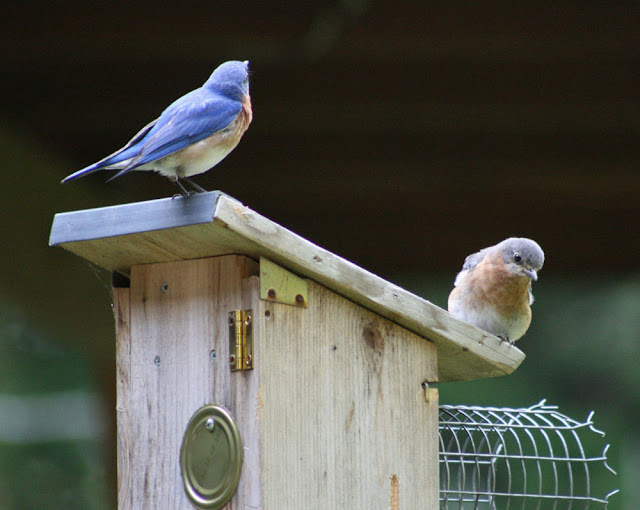 Seconds later, the male bluebird repeated the behavior of the female and flew up to the gazebo shelf. Upon his landing, the phoebe who was perched on a nearby limb (I believe it was the male this time) challenged the intrusion. They fluttered down, clacking beaks, pursuing each other beak to beak, descending until they reached the ground, and continuing their dispute just above the surface. Finally, they parted and again the male bluebird landed firmly on the nest box with a defiant stare.

I, of course, remained frozen in my seat while watching this. There was no time for photos, and little time for breathing. When it was all said and done, the bluebirds sang softly, and the male phoebe landed on the roof above the nesting shelf and sang. 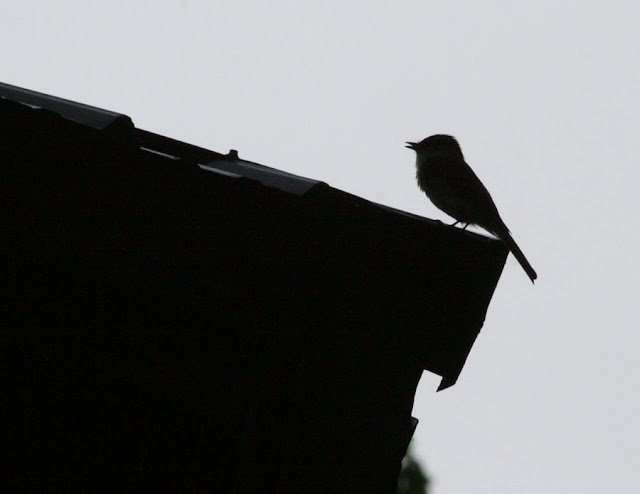 I thought about this interaction, ending as abruptly as it began, with no clear winners and, yet, everyone a winner. Each pair strengthened their site fidelity, affirmed their territory and their "don't mess with me" attitude with their neighbor. And pair bonding for each was surely strengthened in the process.

I don't take these conflicts lightly. In fact, I seriously don't like them. I prefer to think all is peaceful. The phoebes are feeding young and preparing to re-nest, and the bluebirds are feeding young only two days post fledging. Today I noticed that the bluebird fledglings are perching closer and closer. This advance makes me suspect that the bluebird parents will soon bring them to the bird bath and the meal worm feeder, both located near the nest box. These are important reasons to establish order in the neighborhood.  Hopefully, this morning's confrontation will settle territorial issues for a while.

Next post, I'll show you a different circumstance that brought conflict between the neighbors and share another attribute of nesting bluebirds.


Find instructions for making nest box predator guards by clicking the link.  These guards have worked to keep the 9" arm of a raccoon out and have prevented prowling cat predation, as well as snakes.  A 7-inch depth is recommended.  You may also find a version of these guards at the Wild Birds Unlimited store nearest you.
The "meal worm feeder" you see in my bluebird family blog posts is available through Wild Birds Unlimited.
This is the fifth post in a series on this bluebird family.  To see all of the posts visit the link, bluebird family.   In Wishing Upon a Bluebird, an initial encounter between nest building phoebes and bluebirds is described at Vickie's Sketchbook.  To see another story about the gazebo and a picture of it's relationship to the nestbox, visit:  The Magic Gazebo and a Pair of Northern Flickers.
For articles leading up to the bluebird family posts, visit my Wild Birds Unlimited articles:  Smitten with Bluebirds and April Celebrations.  And to see the phoebe female nest building, visit:  The Hard Work of Nesting.
To see last season's chickadee family's nesting success, visit the Secretive Chickadee Family and A Happy Fledging Time of Year.
Upcoming:  Bluebirds Love Water, and wing-waving in bluebird communication.
Share |
Posted by Vickie at 4:12 PM