We refer to fledged whooping crane chicks as "juveniles". It is always heart-warming for me to see these beautifully marked, graceful juveniles flying, but astounding to hear their tiny voices calling, “peep, peep”. Despite their enormous size, they don't acquire their adult voices until nearly one year of age. 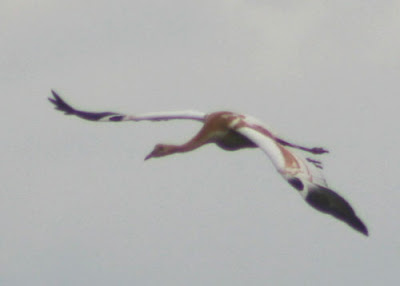 The 2008 ultralight migration class of whooping crane fledglings is on its way to wintering grounds in Florida. Whooping cranes are naturally soaring birds that ride thermals and can make this voyage in as little as nine days. But while these juveniles are learning the migration route, they will only fly in the early morning hours before the thermals rise and while the air is very calm. This is because their surrogate parents are ultralights with costume-clad pilots. 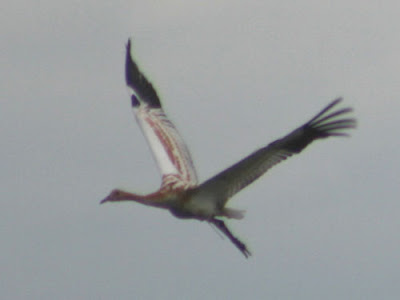 Instead of soaring, they will flap their wings and glide, using the vortices from the ultralight wing for lift, or the slight lift from the wings of the bird just in front of them to aid their flight. 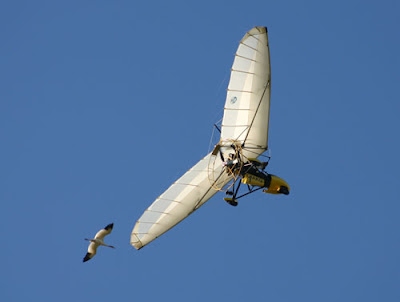 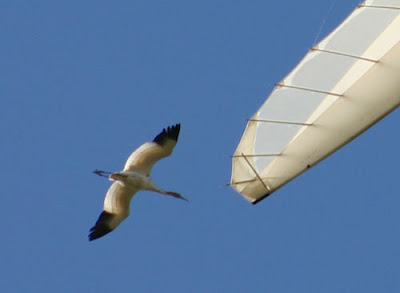 The ultralight migration is now located in Wisconsin and has been grounded a few days due to unfavorable winds for ultralight flying. But some recent photos have been posted that will give you an awesome look at the beautiful plumage of the juveniles, and give you an idea of what its like when the juveniles are let out of their safe enclosure for exercise. You will also see the baggy white costumes worn by pilots and handlers alike, that disguise the human figure enough that our juvenile "ultracranes" do not become accustomed to or feel safe around humans. 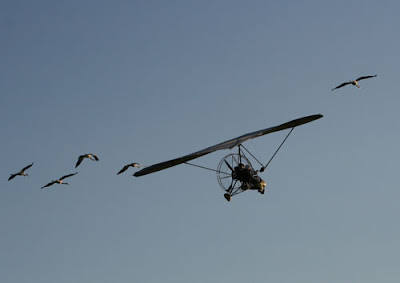 In my next post I will show you why whooping cranes are not backyard birds.
Linked to Bird Photography Weekly #9, at Birdfreak.com, a weekly photography bird listing to promote bird conservation
Share |
Posted by Vickie at 6:50 AM