The Confusing Beauty of Fall Plumage

There is something magical about standing near a tree and having a beautiful bird pop out on a limb, asking to be photographed. 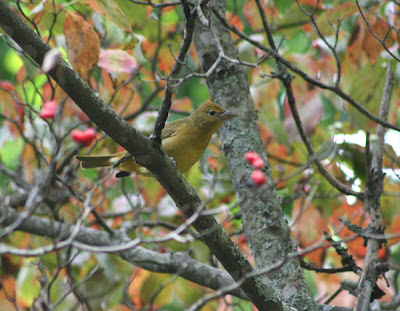 The tree is an American Dogwood easing into fall with a colorful mix of leaves and ripened red berries. And on its branch is a Summer Tanager, photographed on September 28th.

Look how all those colors blend to make her practically disappear! (And according to Peterson's field guide, this is year-around plumage.) 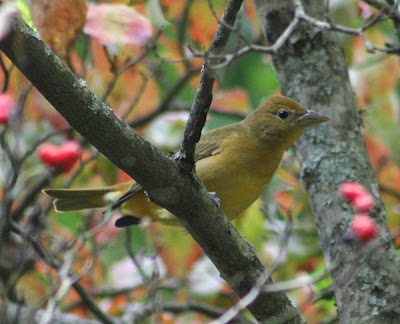 But that wasn't the only magic that happened. I decided to post this sighting on the TN-Bird List (sponsored by the TN Ornithological Society), along with a fall warbler sighting. And that's when the real adventure began.

I called the warbler you see below, a Blackpoll, with some ID help from out-of-state birding friends (a brand new bird for me). And that remains a possible ID, but here's the catch. Historically, the Blackpoll is a rare sighting in our area. The reason why, from a local veteran birder, "...most Blackpolls migrate eastward across the northern parts of the continent until they get to the coast and then turn south migrating over the Atlantic Ocean. They are rare in the south in fall. In almost 30 years of birding, I've probably seen around a half dozen Blackpolls in East TN in fall and its close look-alike, the Bay-breasted, is common." 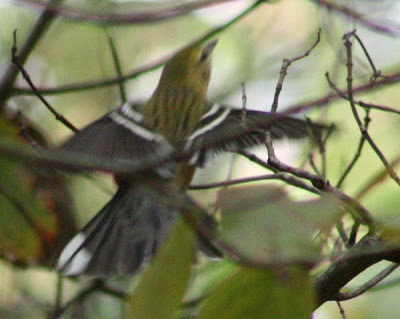 An interesting bit of information about a striking bird that only gave me a brief look. I've since shared the three images I had of the bird (all of them poor), but maybe they will lead to a definitive ID. 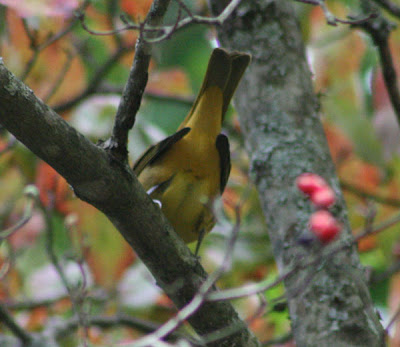 After this warbler exchange, I began to wonder about my tanager ID, as well, and decided to ask for confirmation on whether this bird was indeed a Scarlet Tanager, as I had initially thought. The response: "Actually, the large bill and orangish-yellow coloration means this is a Summer Tanager. Either a female or immature (likely an immature). A Scarlet Tanager would have a much smaller bill, greenish coloration and darker, more contrasting wings." 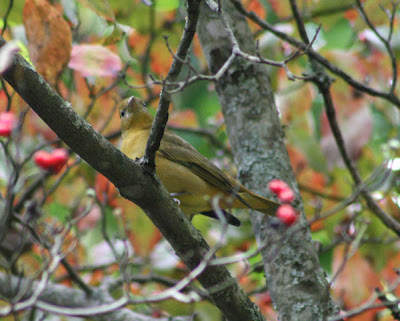 Ah, I am glad I asked. Don't you just love mistakes, especially public ones! But each time a mistake flags interest from an experienced birder with a willingness to help, it leads to new friends, new birds and an endless amount of learning and enjoyment. And in this case, a special 'thank-you' goes to Tennessee's TN-Bird list for making this possible.