When I meet a new bird, I find everything about it curious. 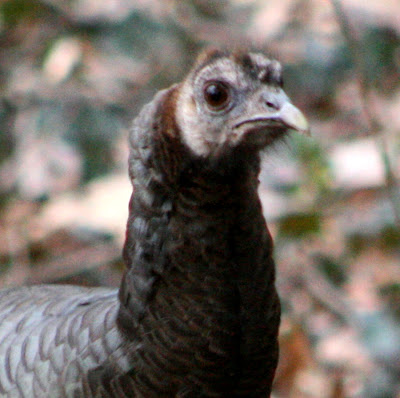 I don't mean that I've never seen a Wild Turkey before this. But I hadn't seen one face to face, nor had the luxury of watching them forage at close range, or seen how deliberately they move, raising their heads periodically to scan their environment. (Click images to enlarge.)

The turkey you see above was following-the-leader in a caravan of fourteen. While I was photographing the trailing birds, the leaders had decided to come up the bank right beside me. It was not until I heard the rustling in the leaves, that I realized they were so close, within five feet. I suspect my expression may have matched hers initially...until I giggled and slowly turned the camera in her direction. 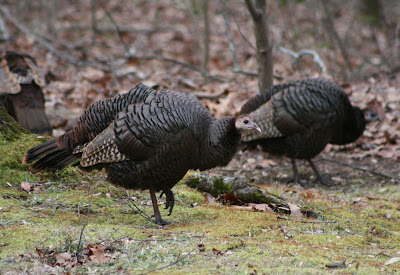 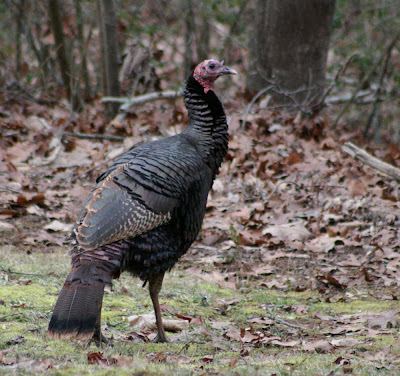 There was a time when it was rare to see a Wild Turkey, let alone see a group pass through your yard. Native only to North America, the Wild Turkey was heavily hunted in the 1800's along with Passenger Pigeons and Bob White Quail. The last documented wild Passenger Pigeon was shot on March 12, 1900 (Christopher Cokinos, Hope is the Thing with Feathers, 228). And by the early 20th century, our nation began to realize that heavily hunted species were not rebounding, among them, the Wild Turkey. 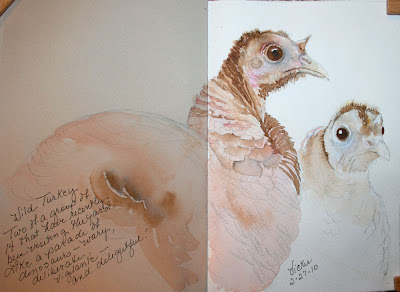 (The left side of the sketchbook spread is tan--it's not your eyes!)
Estimated to number ten million in the 1600's, Wild Turkeys numbered only 30,000 by the 1930's. Concern over their decline became instrumental in establishing agencies responsible for hunting regulations (Doug Markham, Boxes Rockets and Pens, A History of Wildlife Recovery in Tennessee, 45). 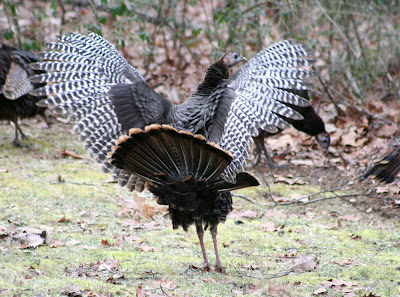 As a result of more than four decades of restoration efforts, I now have these intriguing new visitors frequenting my yard. And here's a fun tidbit about their feathers, found in Sibley's Guide to Bird Life & Behavior, a book that's rapidly becoming one of my favorites. Turkeys don't grow down feathers. Instead, they have what is termed an after-shaft feather, that is, an extra feather that grows on the same shaft but is smaller. This after-shaft is believed to provide the extra warmth they need for colder weather. 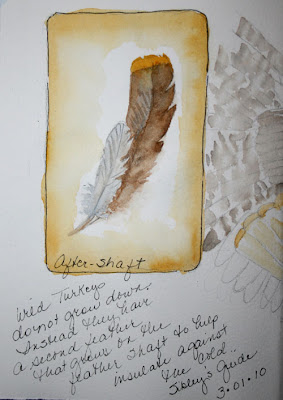 I wonder if it also helps explain how they can puff themselves up so big when disturbed or excited. 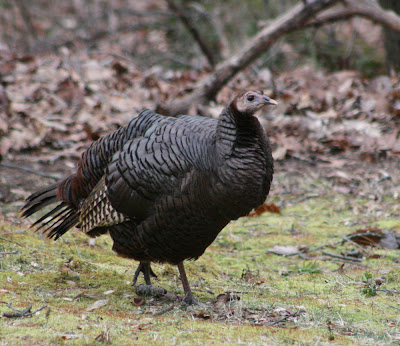 And if the sound of a barking dog or the slamming of a door doesn't startle them into flight, their departure takes place as silently as their arrival, their tall shapes fading slowly into the woods like shadows. 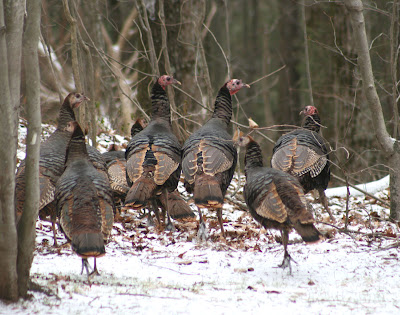 Next post: Back to the warmer climate of Brevard County, FL, and a fun look at a Limpkin!
Linked to Bird Photography Weekly #79, at Birdfreak.com, to promote the conservation of our world's birds.
Share |
Posted by Vickie at 10:00 AM