I've just returned from the Cumberland Gap National Historical Park's three-day Raptor Rhapsody festival with a warmed heart, a satiated mind, and a renewed appreciation for the variety of ways people who love nature share that love with others. 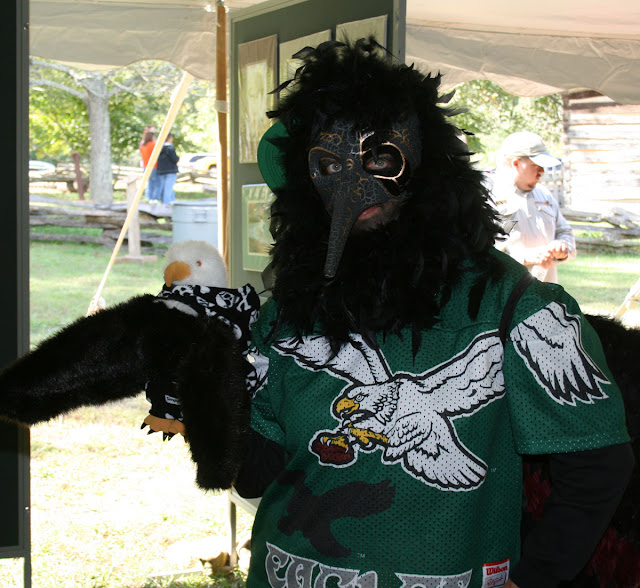 Above you see one of the bird-y characters circulating the grounds of the visitor's center, greeting students as they swarmed off buses throughout the school day on Friday.  Such energy and excitement!  And there to greet them were birds of all kinds, historical exhibits, nature exhibits, imaginative story-tellers dressed in character, a variety of educational programs, including a reptile exhibit from the Kentucky Reptile Zoo. 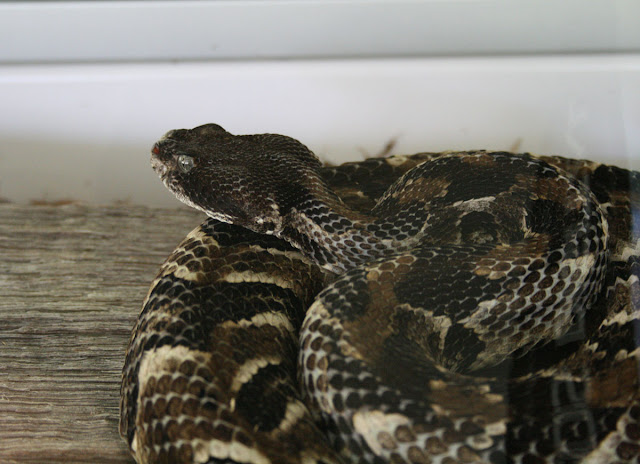 An unexpected fun part of my experience and my closest exhibit neighbors for three days were a trio of pit-vipers--a Timber Rattlesnake (pictured above), a Copperhead and a Cottonmouth Water Moccasin (shown below). 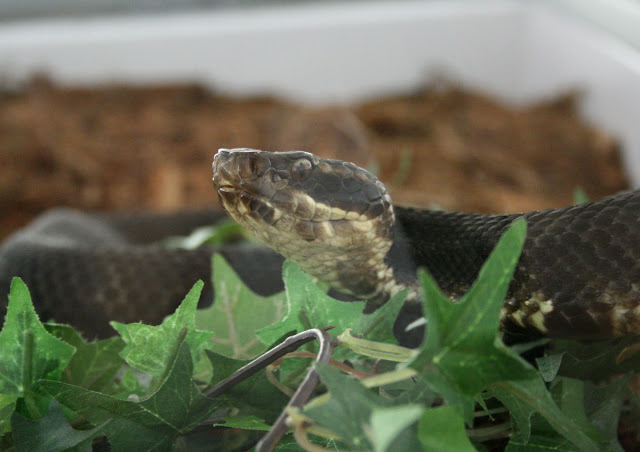 With a sturdy piece of glass between us, being nose to nose with a venomous snake doesn't take a lot of courage. In fact, it's reassuring to know more about these snakes, how to recognize them and what to expect from their behavior. 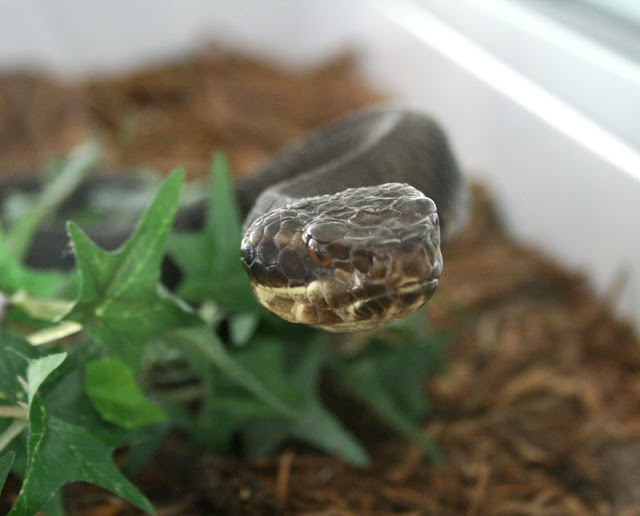 The Cottonmouth, pictured above and below, appeared the most menacing, maybe because he moved around more and gave me better looks. 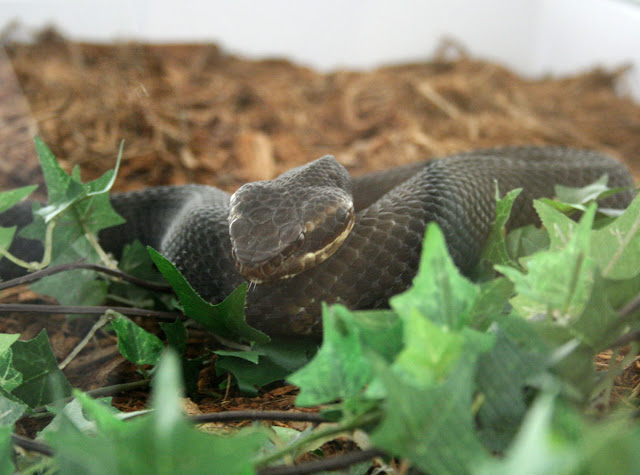 They all have that characteristic wedged head and eyes with slit-like pupils rather than the more rounded pupils of a non-venomous snake.  The rattlesnake remained coiled most of the time, rattling his tail periodically, a soft sound that is important to recognize if you are out on the trail. 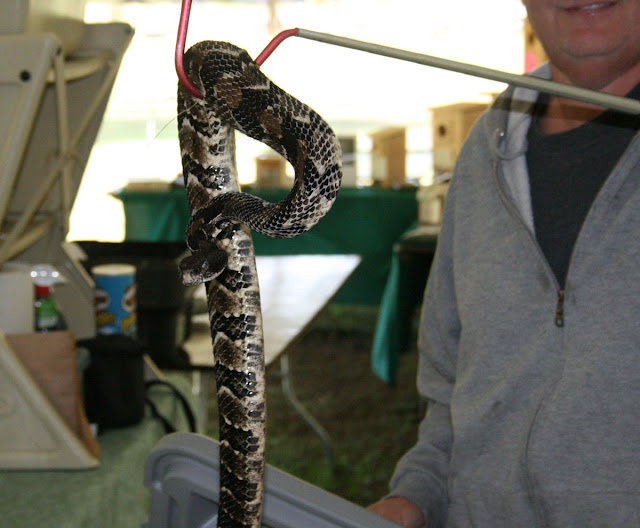 One visitor showed me a recent cell phone image he took of two Timber rattlers coiled under a rock overhang near the trail he was hiking in northeast TN.  The sound of the rattle alerted him.  He snapped the image and moved on. 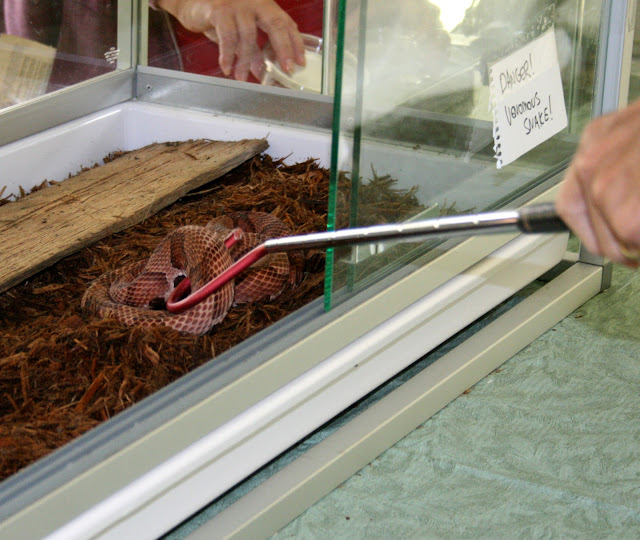 I made a pact with their handler, Peter Lindsey, that if he would give me notice when he was about to take the snakes out of their glass display cases for their trip home each day, I would be sure and not accidentally bump into them!  As a matter of fact, I usually stopped what I was doing to observe and snapped these images, getting  some of my best looks at the Copperhead, who remained hidden under a plank most of the time. 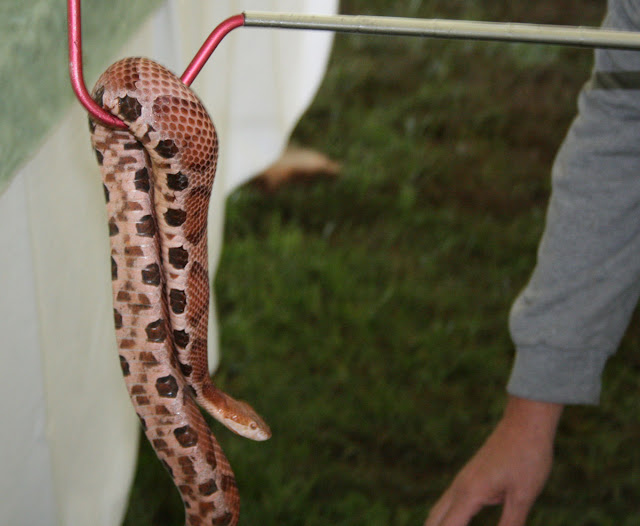 Once, while watching, I noticed how close Peter's hand came to the Copperhead while he was lifting the box lid, which was closed because the Timber Rattlesnake was already inside.  So I asked him why the Copperhead didn't try to bite him while his hand was within reach.  Peter's answer, snakes have no reason to go after anything as large as a human being.  They go after small mammals they can swallow and eat.  Their reason for biting humans, when it does occur, is self-defense and/or surprise.
Next:  An Alligator Snapping Turtle and a juvenile Mississippi Kite
Links:
Cumberland Gap National Historical Park
Kentucky Reptile Zoo
Share |
Posted by Vickie at 1:03 AM