"Our ability to perceive quality in nature begins,
as in art, with the pretty.  It expands through
successive stages of beautiful to values as yet
uncaptured by language.  The quality of cranes lies,
I think, in this higher gamut, as yet beyond the reach of words.
--Aldo Leopold--A Sand County Almanac and Sketches Here and There 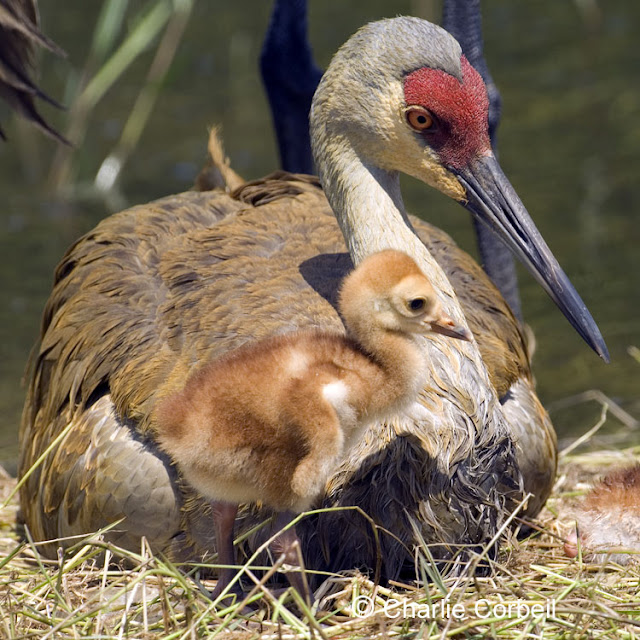 When Aldo Leopold was writing these words in the 1940's, he, as well as other leading biologists across the continent, thought Sandhill cranes would vanish along with Whooping Cranes.  "At this pivotal time, the crane's capacity to inspire human caring and action made a crucial difference to the species' future, as did the commitment of a few individuals....Sandhill populations recovered because of changes both in human behavior and crane behavior."  (Archibald and Harris in the introduction to On Ancient Wings by Michael Forsberg.)

The conservation of wetlands, the occurrence of adjacent agricultural waste grain fields, and stringent hunting restrictions were all key to this recovery. 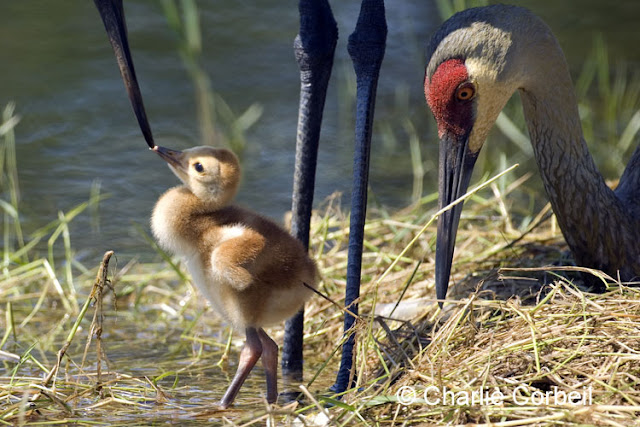 Sandhill cranes are tenacious about their migration path and their stop-over sites.  But this behavior is known to change over time with the influence of human activity. Traditionally in the east, sandhill cranes migrated from breeding grounds in Wisconsin to wintering grounds in south Georgia and Florida.  But in recent years the planting of corn at the Hiwassee State Wildlife Refuge, intended to attract and support hunted water fowl, also attracted sandhill cranes.  Consequently, a quarter of the eastern migrating population has wintered in east Tennessee in recent years. 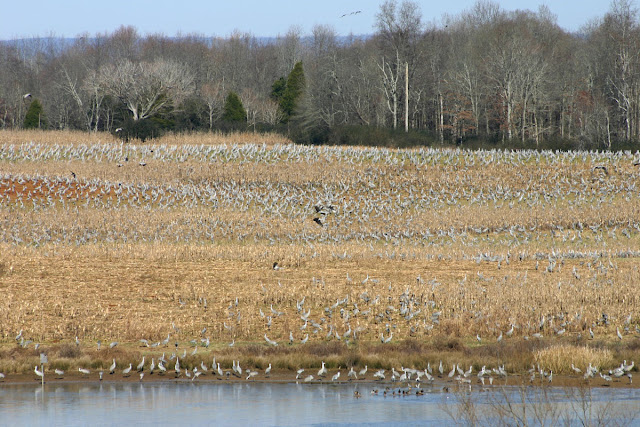 Sandhill cranes staging in waste grain fields adjacent to the confluence of the Hiwassee and Tennessee Rivers at the Hiwassee State Wildlife Refuge in 2004.

It is this spectacle of staging and wintering-over Sandhill cranes, along with the reintroduction of the endangered Whooping crane, that has attracted and delighted thousands of wildlife viewers to the Hiwassee Wildlife Refuge in the past nineteen years. In fact, the wildlife viewing festival that resulted, The Cherokee Heritage and Sandhill Crane Viewing Days, was named to the Top Twenty Events list in 2002 by the Southeast Tourism Society. 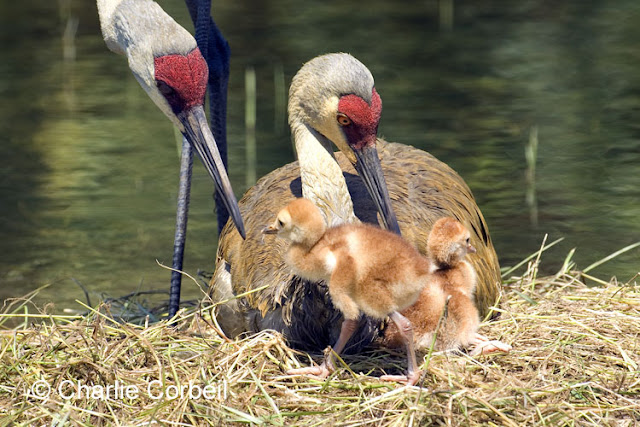 In this post, with the generous permission of my friend, Charlie Corbeil, naturalist and talented photographer from Brevard County, Florida, you are seeing intimate views of a Sandhill crane family.  The large gathering of cranes described above is made up of family units consisting of a pair of crane parents and usually one, sometimes two, juveniles--juveniles that have rapidly grown to nearly the size of their parents in a few short months, fledged just in time to migrate, and still retain their peeping chick voices. In fact, the cries of a juvenile sandhill crane separated from parents during migration can move an observer to tears.
Sandhill cranes mate for life.  Young are taught their migration route by their parents and remain with their parents until the next breeding season.  It is in this family unit that young are protected, learn to find food and learn to select safe roosting sites in wetland shallows.  Here is where juveniles are socialized and learn important survival skills, including those needed for pair bonding and reproduction.
In the beautiful slide show below, you will enjoy a rare close-up view of a sandhill crane family shortly after their two chicks hatch.  Sandhill cranes are attentive parents.  As you view the images, you will find their gentleness heart-warming, their beauty and elegance "beyond the reach of words."
A special thank you to Charlie Corbeil for sharing his beautiful photography.
In North America there are only two true cranes--Sandhill cranes and Whooping Cranes.  In eastern North America, we enjoy the eastern population of the Greater Sandhill Crane, a subspecies of Sandhill cranes, and in recent years, the Whooping Crane, a reintroduced population whose arrival marked the first wild migration of Whooping cranes in the east in over a century.
A Sandhill Crane Hunt Proposal in Tennessee is now in its final stages and inviting public comment.  Take a moment to visit the links provided below and let the TN Wildlife Resources Commission know you DON'T want a sandhill crane hunt in Tennessee.  If the Commission passes this hunt proposal, Tennessee will be the first state in US history to initiate a hunting season for Sandhill cranes in the east (Atlantic/Mississippi Flyways).  Other states are lined up to follow (KY, MN, WI).
Scroll to the bottom of this page, Sandhill Crane Hunt Proposal, to find TWRA's comment link.  Below I have listed some reasons that support opposition to this hunt.  Please add your own.

Reasons to oppose this hunt include but are not limited to:

The Tennessee Wildlife Resources Commission will make the final decision.  The members of this commission  can be found here; email addresses and fax numbers are provided.

To read more about why this hunt is a bad idea visit:
Sandhill Crane Hunting in TN?  Multiple factors say, NO
Also visit the TN Ornithological Society's information and position on the proposed sandhill crane hunt and their well articulated letter to the Commission


Clink this link to find out what's happening in Kentucky
Blog posts around the continent opposing the hunting of cranes in Tennessee:
Julie Zickefoose's discussion on 10,000 Birds, Shooting Sandhills in Tennessee
The Birder's Report:  Help Stop the Sandhill Crane Hunt
Stephen Lyn Bales, author of Ghost Birds, on Sandhill Cranes in Tennessee.
Gary Louck of Greenback, TN--Cranes in Peril
Share |
Posted by Vickie at 6:49 PM