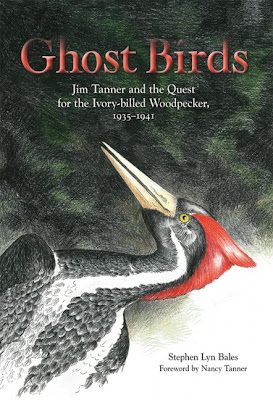 What an incredible story Stephen Lyn Bales weaves in his latest book, Ghost Birds.  Not just a book about the ivory-billed woodpecker, though that would be quite enough, it is the story of conservation’s beginnings in a rapidly changing, war-torn world, a time when sound recordings, movies, and still photography were barely versatile enough to be used “in the field” and field observations were new and uncharted territory.
James Tanner was not only the man who most intimately knew the ivory-billed woodpecker, he was a pioneer in the emerging field of ecology while prevailing ornithological practices were still dominated by shooting birds and collecting specimens.  No one had ever before watched a live bird interact in its natural habitat and recorded that behavior for scientific understanding
.
With his expert storytelling skills, Bales sets a vivid stage for his reader, giving not only the scene’s sensory detail, but the deeper context of history and prevailing mood of the time.  As readers, we get to effortlessly accompany James Tanner into the swamps, a young biologist facing an enormous challenge—learn everything there is to know about ivory-billed woodpeckers.


Bales’ characters are bigger than life, and despite his work being based on reams of research, the story reads like a skillfully crafted suspense novel.  We see and experience Tanner’s celebrations, his disappointments, and his worries.  And through Tanner’s field notes, we experience the ivory-billed woodpecker—an incredible experience that is simultaneously heart-rending,
An excerpt from Ghost Birds:  “The adult ivory-bills spent considerable time near the nest, the male working to create a new hole in a live oak about one hundred yards away.  The female also worked on a hole high in a striped oak.  The pair interacted, with Jim noting how the “male lit below the female, climbed up past her, gave the toodle-toodle-toodle call.  They touched bills twice.”  At times their nestling could be seen with its head completely out of the nest hole, watching the scene that unfolded around him.” 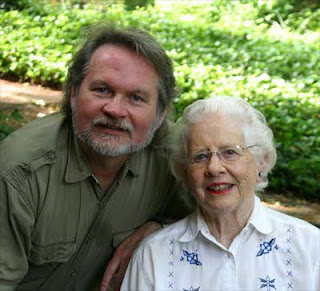 At the same time we enjoy this tender observation, we are reminded of the alarming state of the ivory-bill’s habitat--a “bastion, a lost world”, one of the largest pieces of old timber left in the south, an island surrounded by men with saws.  It is impossible to read this story without feeling loss, without considering the lessons the story presents, and without contemplating the current state of our conservation practices and the time it takes to affect change.

A must-read for anyone who loves birds and champions conservation, Ghost Birds is a poignant journey back in time--a story about a changing field, a story about a man and a bird, a saga about survival that the world will not soon forget.
Photo:  Author Stephen Lyn Bales with Nancy, the late James Tanner's wife.
Links and resources:
Find Stephen Lyn Bales at Nature Calling.
Ghost Birds at Amazon
Ghost Birds at UT Press
Prelude to Ghost Birds:  Bales in the Smithsonian Magazine on newly discovered 1938 Ivory-bill images.
More about Stephen Lyn Bales on this blog
This review can also be found at Amazon
Share |
Posted by Vickie at 9:30 AM