When I arrived home from my office last evening, around 7:00, my feeders were swarming with hummingbirds.  I use that term both because of the large numbers, and the buzzing of that many wings all at once!  Amazing to experience in all aspects. 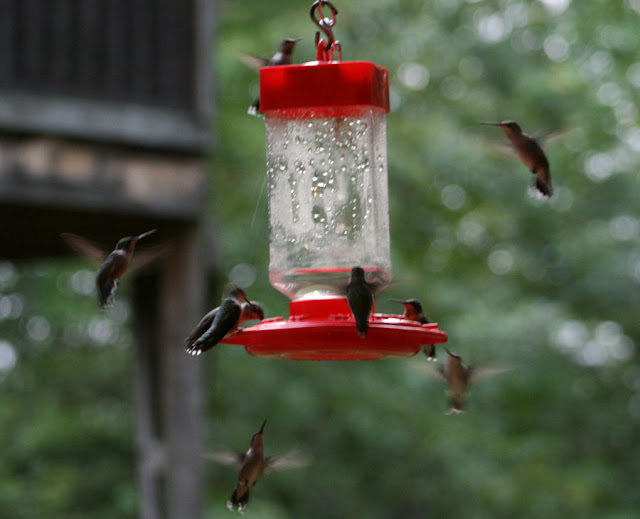 Three of the six feeders I had out were empty, so I quickly refilled them, then settled in a chair to watch the activity.  Hummers jockeyed for feeder position and then just as suddenly, settled quietly in groups of seven or more until the next addition came along disturbing the whole group.  A crisp gusting wind arrived along with the dimming light. We had a front coming through and the temperature had already dropped to 57 F, headed for around 52 F later.  And, while this is not terribly cold, it represents a considerable and sudden drop for this time of year in east Tennessee. 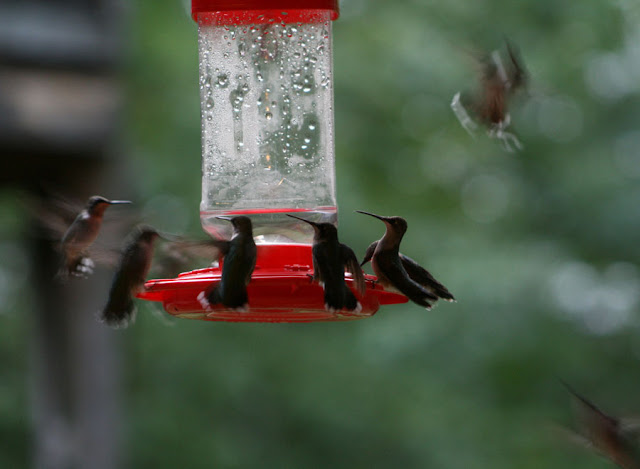 There were clearly more hummers converging on the feeders all at once than I had witnessed on any other evening this week.  I managed to catch as many as nine in some of the photos you see here, but there were more above and below the feeders than I could capture in one image.  Multiply that by six feeders, with at least four to six approaching and feeding on each, and you have an idea of the numbers I was seeing. 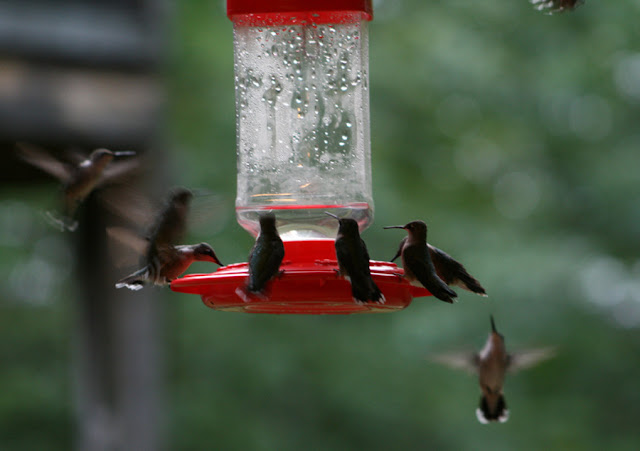 What a spectacle and a privilege.  Since the light was getting very low, I snapped a few images with the flash, thinking that I was probably accomplishing nothing.  But even though the color of the birds changed from their normal emerald green to gold, the images didn't turn out as bad as I initially thought.  I actually like the way the flash lit up their wings.  So, I'm sharing them with you just to give you a bit more of the experience. 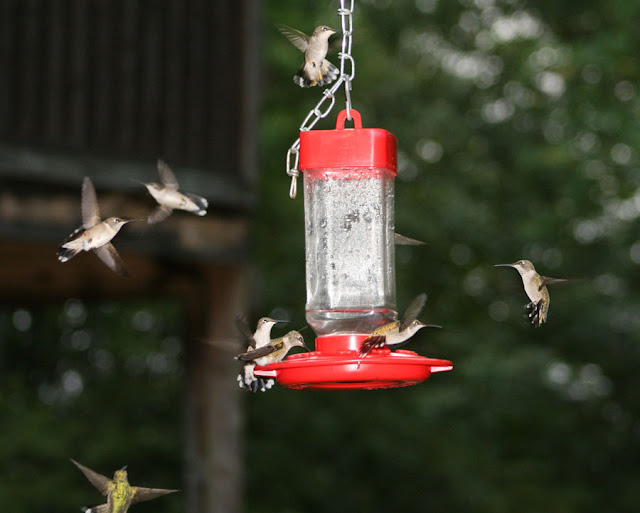 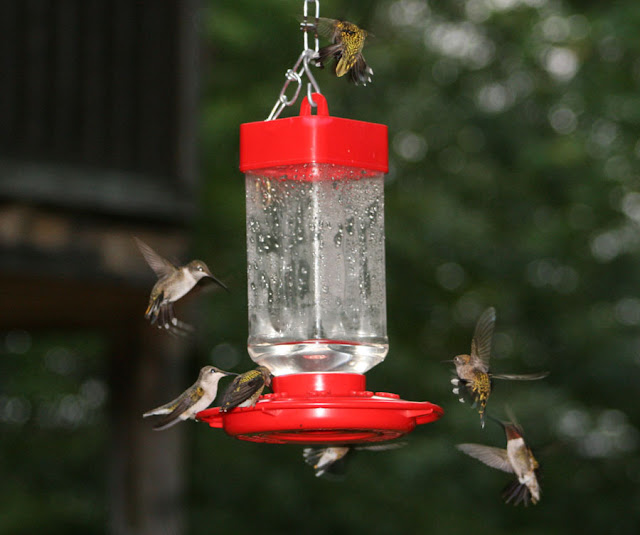 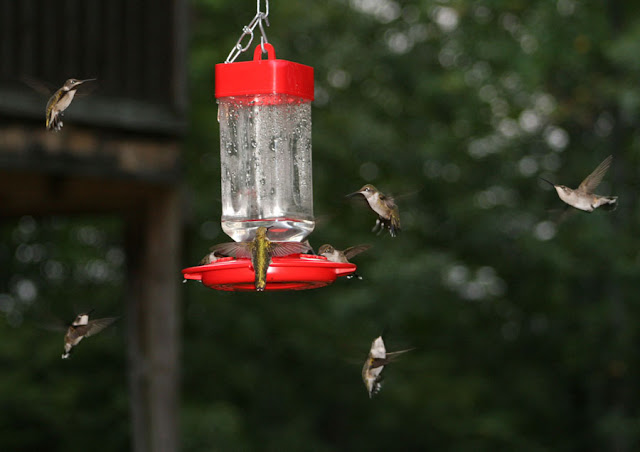 The individual images you see below, were taken earlier in the week in better light conditions. I enjoy trying to capture flight images and will show these to you in another post. I use the images for art reference, useful even when they aren't so clear, but also because I enjoy seeing the magnification through the lens.  Sketching these birds while I watch is my next goal.  I think I'm close.  I've certainly watched them enough! 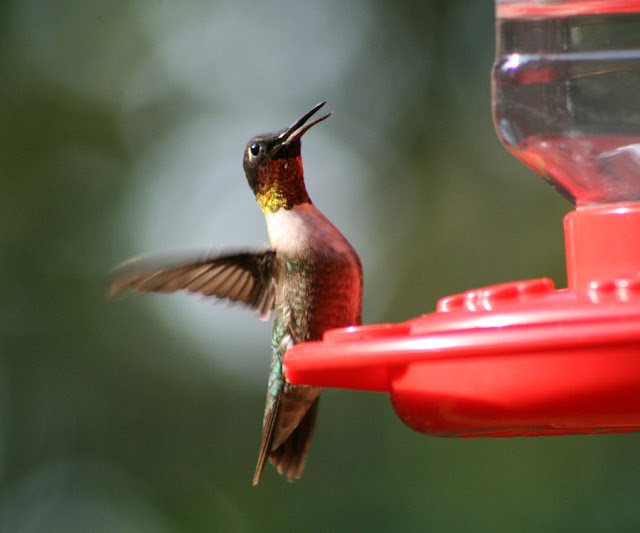 I've had one male at the feeders for the past few days that has a warning chirp considerably different from the others.  It sounds a bit like the rhythm of a chickadee call, but higher pitched.  In a synchronous moment, I managed to capture an image of him at the same time I heard his voice.  It wasn't until I looked at the image that I realized his lower beak is damaged, bent so that it doesn't completely close. 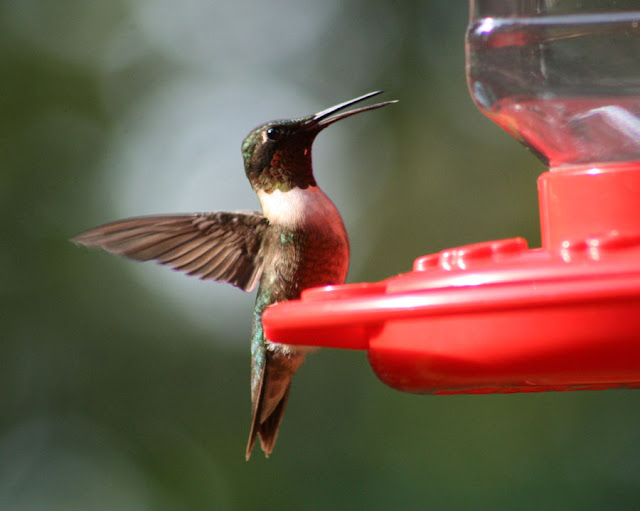 These are not exactly the details you want to see, but I comfort myself in seeing that he seems healthy and preened, and has done a fair job of establishing his place at the feeder, guarding from the top from time to time.  In fact, I've seen several males guarding from that position this season, maybe because of the heavy migration numbers.  This one was in the middle of all the fray.  I expect he, along with many others, said their goodbyes to this feeding station, and I'll be seeing a fresh group of faces with first light.
Share |
Posted by Vickie at 12:15 AM