Western hummingbirds began arriving in Tennessee as early as August, but they are illusive and difficult for banders to capture that time of year while there are so many insects and flowers available for foraging. Autumn has settled in now, and presently Katherine Noblet, of Johnson City, TN (Carter County), has a possible Rufous female visiting her feeder. 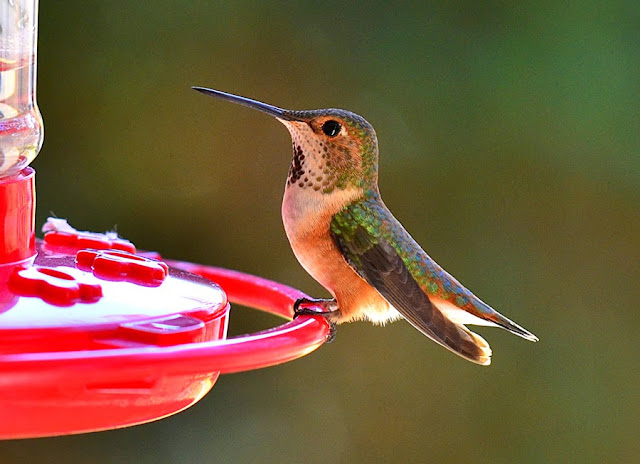 The female could either be a female Rufous Hummingbird or a female Allen's Hummingbird.  Females in both species are indistinguishable in the field but have differences in their tail feathers that can be identified in the hand of a bander.  The Allen's female has more narrow outer tail feathers.

Katherine has had Rufous hummingbirds visit her home in the past, and while we wait for a positive ID on this bird, she is getting some gorgeous images. 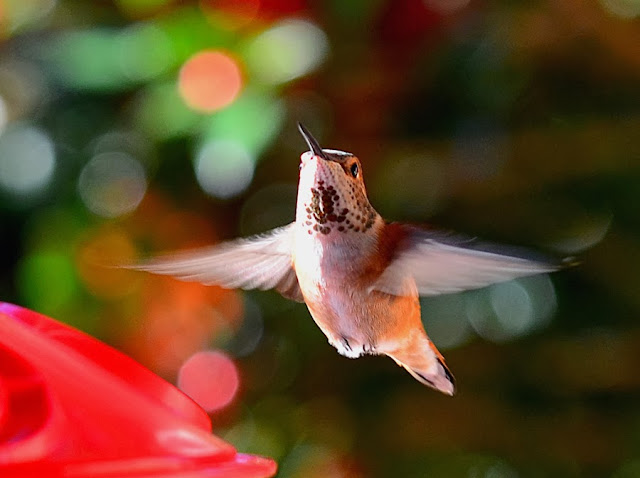 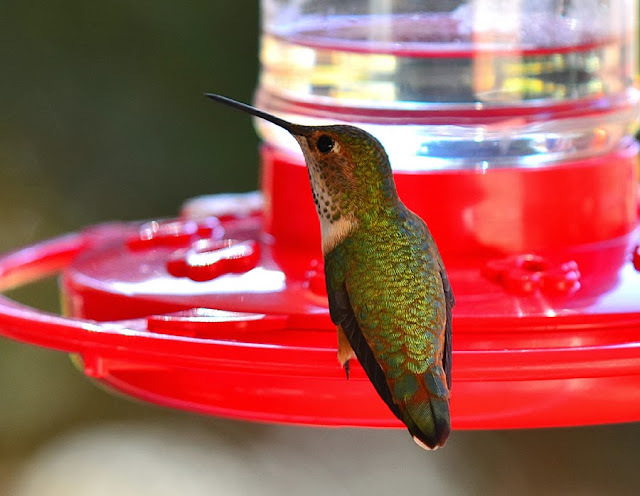 A mature male Rufous, below, is currently wintering at the home of Tommy and Virginia Curtis in Smithville, TN (DeKalb County) in middle Tennessee.  This male has been present for two weeks.   The Curtis family had an over-wintering Rufous hummingbird in 2004-2005 that stayed for 108 days, from Nov 26-March13. In 2006 they had an immature Rufous present from Dec1-Dec11.  An immature Ruby-throated hummer was present at their feeder from Nov 10-16 in 2012, and the current wintering Rufous was first sighted October 30th. They will be adding a heat lamp to the feeder tomorrow to keep the nectar from freezing. 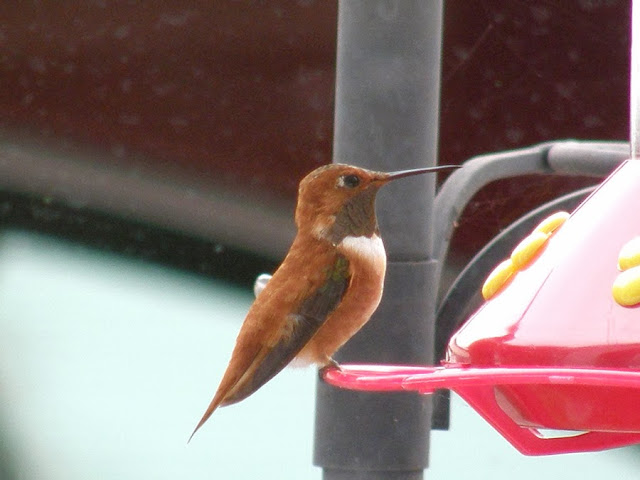 And below, a Calliope Hummingbird, located in the Nashville area, arrived on October 27th. This is believed to be the same Calliope that appeared in 2012 and was present from October 12th until sometime in April of 2012.  At that time he was found to be a hatching year bird and Scott describes him as much more spectacular as an adult!  Visit this link to see his appearance last year:  Calliope 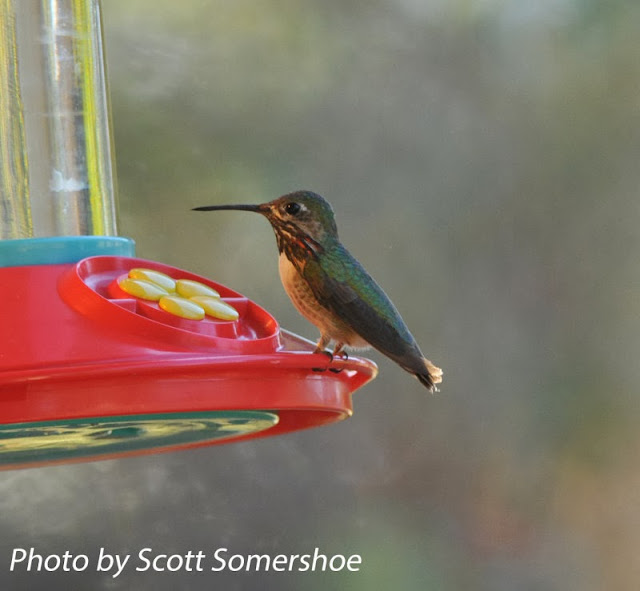 Calliopes are the smallest hummingbird normally found in the United States and the only hummer to have dark purple-red gorget feathers on a white background in a shape that resembles an inverted V.

Tommorrow morning (Nov 12th) a strong cold front is moving into middle Tennessee (Nashville and Smithville areas) bringing advisories for 20-30 mph winds, gusting up to 45, a mix of sleet, rain, snow, with night temperatures plummeting to 19° F .  That same front will be pushing east into northeastern Tennessee and the Johnson City area later in the day.

One wonders why these hummers are finding their way to Tennessee instead of the warmer climates of Mexico, their traditional winter home.  Despite the cold weather that is typical of Tennessee winters, each year brings more hummingbird sightings than the year before.

A special thank you to Katherine Noblet, Tommy and Virginia Curtis, and Scott Somershoe for the use of their images in this blog post.

Fourteen species of hummingbirds have been documented in the east during fall and winter months.  In east Tennessee, report sightings to Mark Armstrong at Woodthrush@bellsouth.net or 865-748-2224.  For a list of contact information for other eastern areas, visit winter reporting on the Hummingbird Study Group website or report sightings to Bob and Martha Sargent, Rubythroat@aol.com or 205-681-2888.
Wintering hummingbirds in Tennessee
Visit Bob Sargent's information on wintering hummingbirds
Bob Sargent describes the Rufous Hummingbird as very cold-hardy.
Sargent on wintering Calliopes and the Allen's Hummingbird
Hummingbirds in my watercolor gallery and hummingbird art on Vickie's Sketchbook blog.
Hummingbird banding
Share |
Posted by Vickie at 11:43 PM