Ever wanted to see endangered Whooping cranes but couldn't get to their location? Or wished you could watch the just-fledged juvenile Whooping cranes learning to follow their ultralight parents as they ready for their first migration? 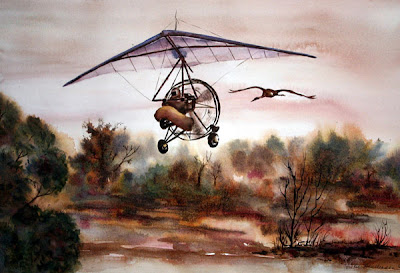 Now you can! Operation Migration has launched the first ever CraneCam, providing an opportunity for viewers all over the world to see the juvenile Whooping Crane class of 2009 train for migration at Necedah National Wildlife Refuge.

This morning I watched two beautiful cinnamon and white juveniles resting in the pen, catching insects in the air and preening. I also saw two adult Whooping cranes standing outside the pen, curious about the juveniles. All of this without traveling at all!

In the early morning, between 6-7:00 CDT you will also have an opportunity to watch training. You may even catch a juvenile's fledging flight! (I'm starting to wonder how I will ever get anything else done!)

Today is the launch date of the live streaming video and audio CraneCam provided by the Duke Energy Foundation and Operation Migration.

Operation Migration (OM) is also poised to realize an avian and aviation milestone. While leading its ninth generation of Whooping cranes, the Class of 2009, on their fall migration, OM will log its 10,000th air-mile while teaching another class of juvenile Whooping cranes the migration route south.

The innovative organization is asking everyone worldwide to "Give a WHOOP!" and help them collect an Honor Roll of 10,000 WHOOPS! - one for each migration mile that has been flown with the endangered Whooping cranes following ultralights.

You can put these buttons on your blog, too. By doing so, you will be helping us spread the word as we promote worldwide conservation, open a window into the world of the endangered Whooping crane and celebrate these two milestones! Just send me an email with subject line: "cranecam" at viclcsw (at) aol (dot) com and I'll send you images and links for your website or blog.