I just paid a visit to Operation Migration's website to see how training went this morning. What I discovered was a wonderful video clip, something you will want to see, a pair of wild Whooping cranes threat posturing. 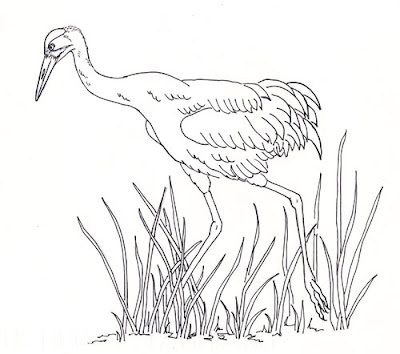 When you view the video below, you will see two adult Whooping cranes walking with their heads down showing their bald, bright red skin patch. Cranes can engorge this skin patch with blood, making it larger and redder. When they hold their heads down, the skin patch is prominent and represents a warning to intruders that an attack could follow. 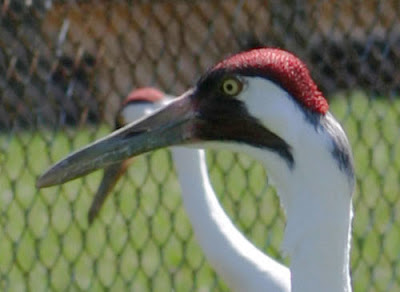 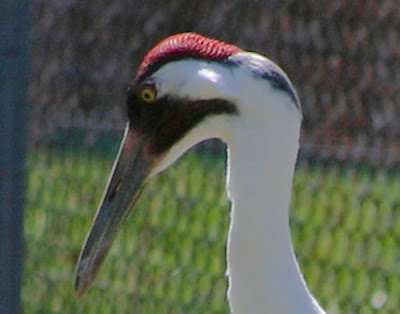 Chris Gullikson, one of Operation Migration's costume-clad pilots and the videographer, is also posturing by holding the red head of his Whooping crane hand puppet high in the same position. Size matters in the Whooping crane world and Chris, whose human shape is covered with a white costume, represents a larger threat in crane posture language.

As you view the video below, don't miss the stomping that occurs early while the bird to the right is still in the shadows. He repeats it later. You can hear it as well. Stomping is an additional threat behavior. Also, remember that Whooping cranes are five feet tall with a wing-span of seven feet!

The reason for the encounter? Chris is at Necedah National Wildlife Refuge and is discouraging the pair from interfering with the ultralight migration training by trying to lure the juveniles away. You can see Chris' shadow as you view the video. At the end of the clip, the pair flies over to another wild crane who has trespassed into their territory. After they chase him off, they sound the unison call, trumpeting their successful defense of territory. The unison call also serves to strengthen the pair bond.

Great clip, Chris and Operation Migration! Threat posturing, a rare glimpse into the lifestyle and personality of Whooping cranes.

Check out migration training as it progresses at Operation Migration's field journal or by watching the cranecam as training is underway. And don't forget to Give A Whoop!

Linked to Bird Photography Weekly #49 at Birdfreak.com to promote the conservation of our world's birds.
Share |
Posted by Vickie at 4:00 PM