Another Western Hummer in East Tennessee 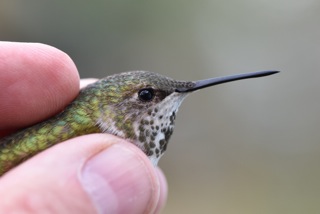 In the above image, the captured hummingbird is photographed to capture the details of her feather color patterns.  When turned to the side, this female's orange-red cluster of gorget feathers appears charcoal or black.  Photo credit:  Mark Armstrong. 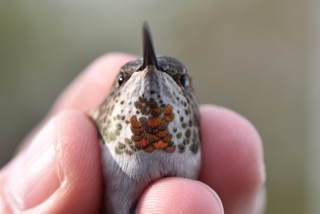 When facing the light in a different direction, the feathers shine a brilliant orange red.  Photo credit Mark Armstrong

This change occurs because the color is not due to feather pigment but is created by the reflection of light on feather structures.  A more detailed description can be found at Sibley's Guides. 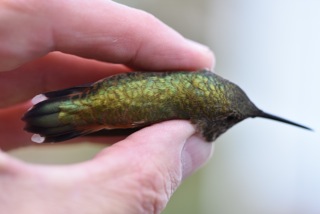 Mark Armstrong, Master Bander of hummingbirds and songbirds, commented about this hummingbird's condition:  " Something striking to me but difficult to explain is that she was just a really pretty bird.  I’ve banded some young birds as well as adults that were in molt but this bird finished [her molt] and was in really perfect plumage and just looked good.  The only thing left for her to finish was her primary molt.  The last two primaries at the end of the wing were old everything else was fresh.  She had a good fat load also.  She weighed 4.3 grams and most of the female rufous that I band are in the 3.5 gram range.  I’m hoping that the bird will stay a while but they don’t carry a fat load for fun and this usually means they are preparing for a move." 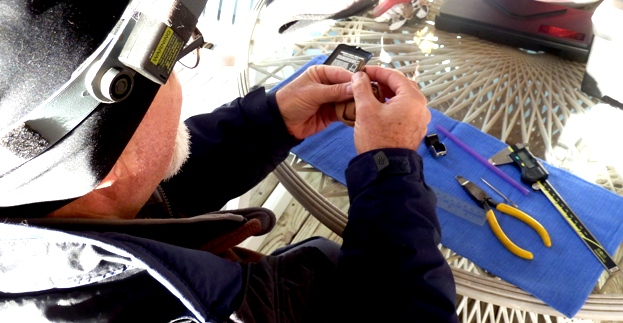 If you needed to know the positive ID for the hummingbird visiting Musick’s Campground since the middle of November, then tic that one down for your life list or annual list as a Rufous Hummingbird. They occasionally frequent a lingering feeder, in appropriate habitat, during late fall or winter in our area.

Mark Armstrong, and his wife Jane, of the East Tennessee Avian Research,Inc. group out of Seymour, TN, headed up before daylight to capture and band the tiny creature which is en route from its breeding area along the Pacific coast in the northwest of the US and Canada, migrating to the gulf states for the winter and some to South America.  Mark caught it in less than 10 minutes, just before 9 a.m.  A careful study of the feathers, measurements and weight determine it was an adult
female.  He is an authority because Mark and Jane have caught and banded more than 100 Rufous hummers and more than 3,000 Ruby-throateds.  Mark is [the retired] curator of birds at the Knoxville Zoo.

This winter has been slim pickings so far.  He has encountered only about three birds, mainly in the Knoxville area.  That is very low for him.  He does not always scrape the bottom of the barrel.  In June of this year,  he trapped a Ruby-throated in his backyard at Seymour which had been banded in September 2014 at Lake Jackson, Texas.  Well, for that matter, he caught a Rufous at the feeders on Mae Musick’s porch at South Holston Lake in eastern Sullivan Co., 1 Dec 2009, which had been banded 10 Jan 2009 in Pass Christian, Mississippi, a bit west of Biloxi and Gulfport.

To capture the hummer, he took the South Holston bird’s feeders down and away from the heat lamps which prevent freezing.  Then he hung a cage not too different than a typical bird cage but much larger. One of the feeders was placed in the cage and the door held open with a release “string.” The hummer soon came to the cage and went right into the feeder.  Mark closed the door and safely placed a tiny band on its leg. 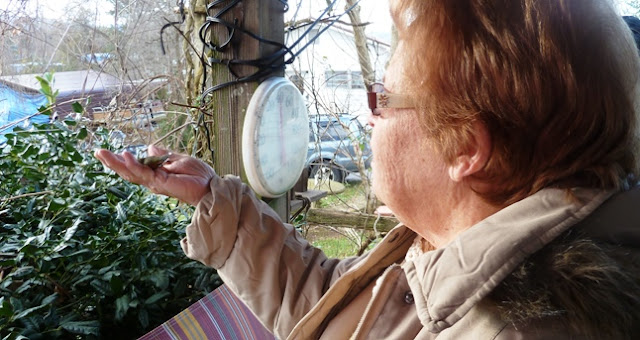 In the photo above,  Nancy McPeak of the Bristol Bird Club, is holding the hummer in her hand where it left quickly at its own determination and effort.  Photo credit: Wallace Coffey 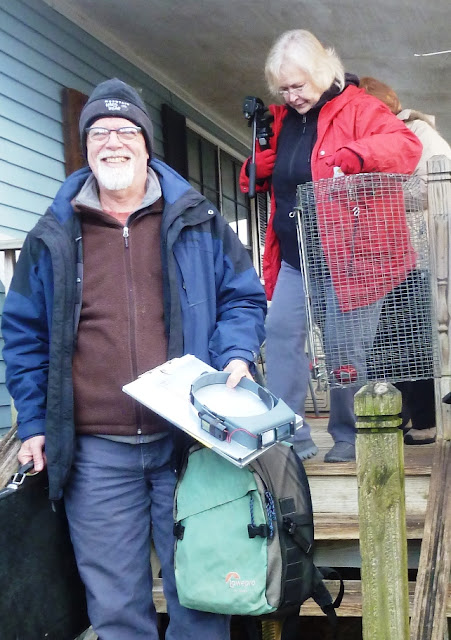 Mark and Jane are shown here as they prepared to leave the hummer/banding site. They carry lots of equipment to get their job done accurately.  Jane is carrying the cage trap. They also documented the ID and details with many close-up photos of the bird. For the most part, only the capture and study of details,including specific feather study, is reliable for species determination.  Most of us can fairly well judge some birds but only handheld counts.

Present for this morning’s capture and study were Mae Musick, Carol Musick, Nancy McPeak, Mark and Jane along with Wallace Coffey, Bristol, TN. 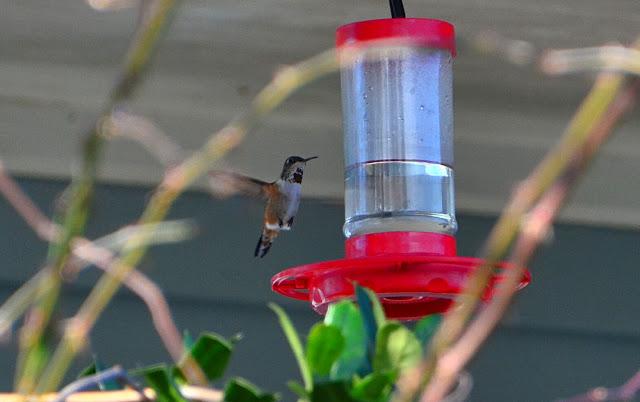 Keep at least one winter feeder out and you may find yourself hosting one of these rare winter visitors!

Hummers in Snow and Cold
Learn more about Wintering Hummingbirds
More on Rufous Hummingbirds
Share |
Posted by Vickie at 6:41 PM